Thought i'd register onto here after lurking for a little while whilst researching the SS.

I have not long been in the saddle as only recently passed my mod tests although I have been riding a little 2017 Honda MSX/Grom for most of the summer - it's a great laugh and yes Im keeping it. 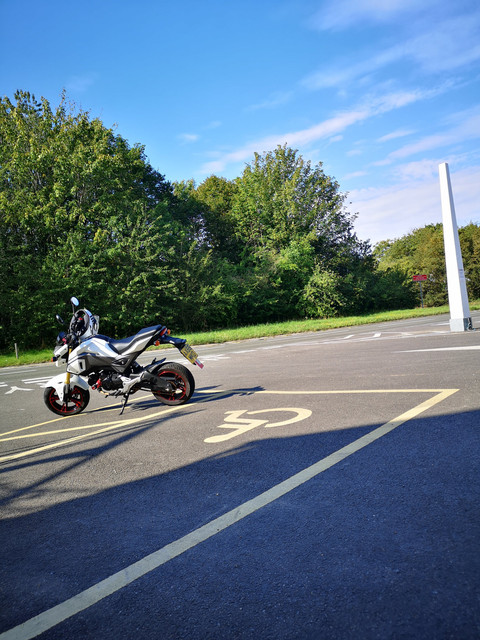 I have been searching for my unicorn which has been found under the guise of the SS! I wanted something I can use as a weekender, something I felt awesome on, didn't try to murder me the moment i twisted the throttle and have the ability for me to look back at a petrol station and go "**** thats a nice bike...oh yeah... it's mine!

Didn't want an all out sports bike as my left knee isn't fantastic and didn't want something I have to lay on constantly.

Bikes which were tested;

Out of everything I tested the supersport has come up trumps time and time again. The only fault I found with it on my test ride was an ache in my right wrist, but in the bikes defence I was nervous gripping slightly and further into the ride it calmed down.

I must say that the guys down at Blade Group in Abingdon are fantastic, very informative. Pete knows a lot about Ducati and is definitely a credit to the company! They pulled out all the stops for me and my friend to test ride a few, including chucking a Kawasaki through the workshop on a saturday so we could test it.

Well worth the trip if anyone is in the area (Ducati, Honda, Kawasaki and Harley all in the same building) 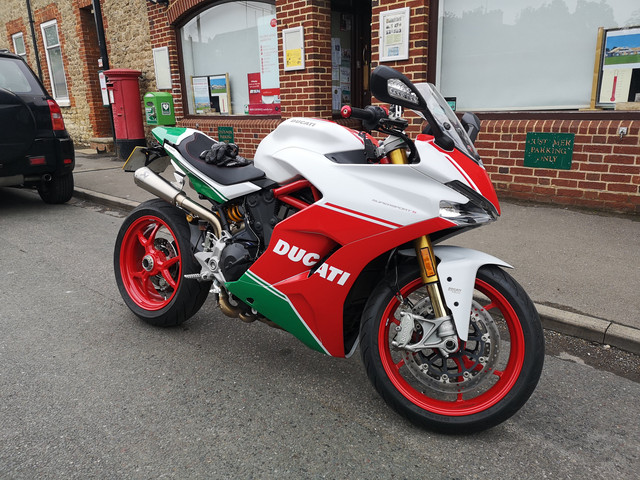 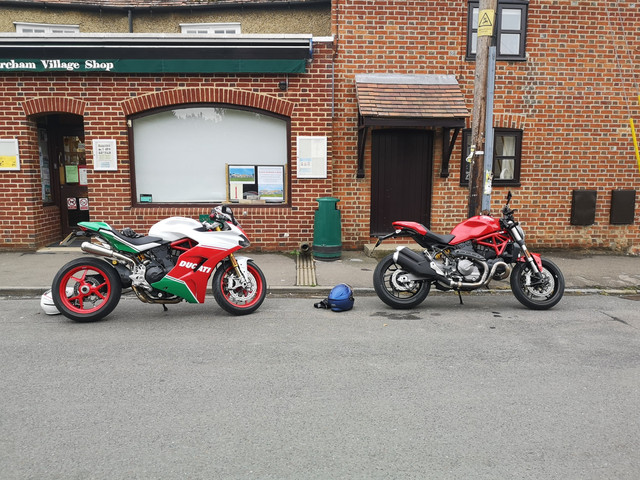 My plan is a year or two old standard supersport then add the quickshifter at the local dealer afterward. The deal I was offered on a new SS-S was very tempting (free panniers, tank bag and heated grips or an akrapovic exhaust system for a contribution of £700 fitted or £300 not) but it will take nearly all of my savings and I dont do finance.

Found a couple on the local sales sites for around £7500 and I have to allow cash to have crash protection put onto that also in the form of the R&G bobbins or similar, but still researching them and pf course a vinyl wrap of sorts (similar to the one tested as I fell in love with it)

The next step is I need to go back to Ducati to test the SS again but on a longer stint, hopefully a couple of hours instead of just the one just so I can get the feel for the wind blast, comfort at 70-80mph etc.

So in all you probably won't hear a lot from me yet as im still lurking without a bike but it's coming. Very soon.


Join Date: Feb 2019
Location: Lower Alabama (LA) USA
Posts: 586
Likes Received: 434
Garage
Look forward to seeing what you purchase. Believe you will like the SS very much. Have been to Oxford and its a beautiful place. Wish Id had my bike with me while there!
jam87jam likes this.
Mike

The SS is a wonderful bike, youre going love it!

Ive been lucky enough to own all the naked Triumph Triples, Rocket 3, Street and Speed, and they are each fantastic. Those raucous engines hit the sweet spot between punchy twins and smooth fours. Ive had my fill of wind blast. Any trip over 100 miles and Ive had quite enough thank you very much. Im about the same size as you and I find the wind protection on the SS with screen at the lower position is perfect. The L-twin oozes character and the bodywork is sublime, and Im not folded up like an anglepoise lamp. Its not without its faults but when it comes to  look back at a petrol station and go "**** thats a nice bike...oh yeah... it's mine! nothing else comes close, except perhaps a Panigale. Call me shallow, it shouldn't matter but it does.

Oh yes, I found the wrist ache disappears after a couple of rides.

Just a little update. Nothing purchased as yet but I believe there is one that should be between my legs before christmas

I did however take the BMW R Nine T out for a test as a weekender bike and that has a lot of character, an 8500rpm limit is quite comical as I did think i was doing something wrong to start with! But its a little blaster and im pretty sure that one of those will be part of my collection at some point. Along with an 899 of course.